What’s the Difference Between Grilling and Barbecuing?

Throwing a barbecue this holiday weekend? Heatin’ up the grill, throwin’ on some steaks, charrin’ up a couple burgers and ’dogs?

Sounds awesome, but are you really barbecuing? Or are you grilling?

Turns out that like many things with a rich history, the difference is… complex. At the root of the issue is the very definition of barbecue, a practice that—within certain definitions—is as old as humankind (if you subscribe to the belief that cooking made us human). Barbecue expert and cookbook author Meathead Goldwyn argues that the defining characteristic of barbecue is smoke: if there’s smoke involved, it’s barbecue. “There are many forms of barbecue around the world and it is the presence of smoke that unifies them all,” Goldwyn says. He accompanies this with a handy graphic: 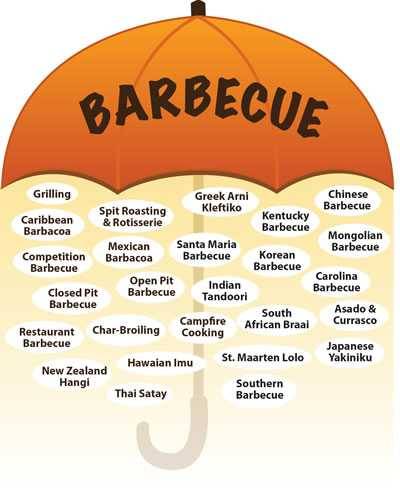 With Goldwyn’s definition, grilling is a subset of barbecue. So what defines grilling, then? Grilling involves high, direct heat, from charcoal or a fire, coming from one direction; when the food is placed on the grate, the heat is transferred through convection. This all means that grilling is hot and fast: the surface of a grill is usually 500°F to 800°F, which means that whatever you’re grilling gets cooked quickly—and probably gets some char on it, too. Grilling therefore lends itself well to small, relatively tender cuts of meat—think steaks, chicken parts, hamburgers, and chops—as well as seafood, vegetables, and fruit.

So if grilling is the hot-dogs-and-hamburgers kinds of stuff, where do the briskets and the ribs and the pork butts and the stuff we in the U.S. of A. think as “barbecue” fit in? That’s Southern barbecue, and in fact, it’s quite different from grilling. Rather than ripping-hot heat, Southern barbecue is all about taking things low and slow. The coals and flames are set off to the side or far below the food, and the lid of the grill or smoker is kept closed; the heat is then transferred through convection, in which the heat and smoke circulates and commingles around whatever’s being cooked. The temperatures for Southern barbecue are usually in the 200°F to 300°F range, making the cooking process a much slower ride—especially considering the fact that the technique is used for larger, tougher cuts of meat, such as brisket, ribs, pork shoulders, and even whole animals. The process allows for the connective tissue to properly break down, resulting in that transcendent fall-apart texture that people stay up all night fire-tending for (or just waiting in really long lines for).

And how about the spelling? Is it barbecue, barbeque, BBQ, B-B-Que, Bar-B-Q, Bar-B-Que, Bar-B-Cue, or some other permutation? Because the word originally comes from barbacoa, linguists and historians generally agree that the correct term is “barbecue”—and the others are just colloquial. So maybe you’re actually barbecuing this weekend, after all!

What's the Difference Between Holland and the Netherlands?

What’s the Difference Between a Sweet Potato and a Yam?

What’s the Difference Between Whiskey, Whisky, Scotch, Bourbon, and Rye?

What’s the Difference Between an Ale and a Lager?